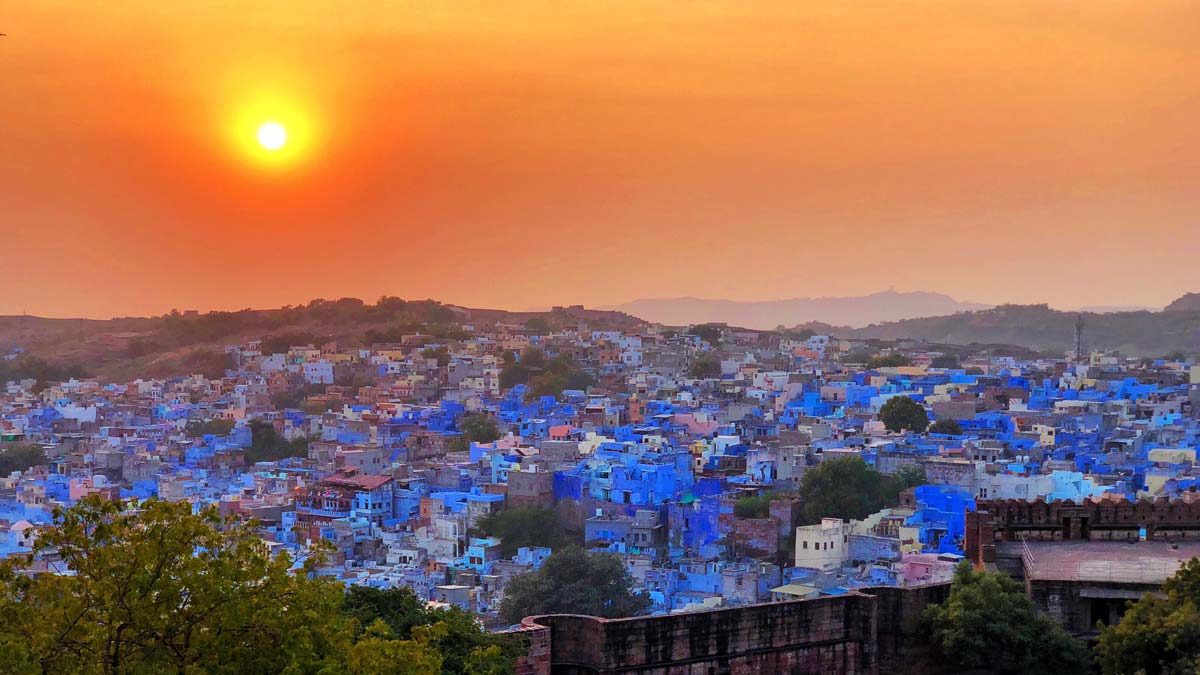 Jodhpur, the second biggest city in Rajasthan has an intriguing past. The Jodhpur city was founded in 1459 by Rao Jodha, a Rajput chief of the Rathore clan. Jodha succeeded in conquering the surrounding territory and thus founded a kingdom which was later known as Marwar.

Jodhpur was formerly the capital of the Kingdom of Marwar, which is now a part of Rajasthan. Jodhpur has now become a famous tourist attraction with numerous palaces, forts and temples. The sombre scenery of the Thar Desert makes for a perfect escape for the explorer in you.

Jodhpur is popularly called the “Blue City” because of the turquoise coloured architecture. While being known for the picturesque sunsets and the warmth that the city enthrals, Jodhpur is also known as the “Sun City” amongst the people of Rajasthan and elsewhere too.

Jodhpur, being a culturally rich city is often referred to as the “Culture Capital” of Rajasthan. Being bordered by the Thar Desert, the city life has been highly influenced by the nomadic ways or the so-called “Gypsy Groups”. Jodhpur is renowned for its spicy and fried food. The language spoken, the colourful clothes worn by the women, and the hospitality clearly dictate the happy and lively vibe that the locals possess. The Marwari language is quite respectful in nature in which everyone is greeted with “sa” suffixed to their name which also implies the happiness of seeing that person.

Jodhpur has successfully managed to keep alive its culture which is quite evident in its day-to-day life. To get a closer look at the Jodhpuri culture, you may visit the Sadar Bazaar, also known as Ghanta-Ghar or Tripoliya Market which clearly have become the faces of the typical Jodhpuri culture.

While you plan on visiting the pretty Blue City, book your rooms at Cygnett Style Mantra, Jodhpur for a closer look of the Marwari culture and to experience Cygnetture hospitality.

An usher for you to explore the “Sun City”

Jodhpur is popular for its blue structures, which were initially painted to keep the houses cool as the weather in Jodhpur remains bright and sunny all around the year which is why Jodhpur is also called “The Sun City”.

This following series of the “Top 5 Places to Visit in Jodhpur” will give you a better interpretation of what the city holds for you.

The royal Mehrangarh Fort, which transcends the “Blue City”, is one of the biggest and most well-known fortresses in India. The fort stands a hundred feet in splendour on a perpendicular cliff and 400 hundred feet above the sky line of Jodhpur. The fortress has been secretly re-established and its exhibition hall has a remarkable presentation of history, including about 15,000 artifacts from Maharaja Gaj Singh II’s own accumulation. Furbished with red sand stone, imposing invincible beauty that beckons the heritage and history of the Marwari royals. It also has a historical shop where you can buy souvenirs that depict the royal Rajasthani culture. The social exhibitions that happen day by day at different places inside the fortification, as a major aspect of the uncommon spotlight on people’s craftsmanship and music, are another feature of the majestic fortress. The proportions of the fortress are so colossal that Rudyard Kipling called it “The work of the Giants”. Today it is renowned to be one of the finely preserved forts of India.

This meticulously created cenotaph was worked upon in 1899, to pay a tribute to Maharaja Jaswant Singh II. It is highlighted by white marble and unusual vaults, while the indoors of the Thada are decorated with representations of the Rathore rulers. It’s a serene spot to unwind and appreciate awe inspiring perspectives of the Fort and the city. Numerous visitors spread around in the front garden to absorb the historical architecture of the Rathore empire.

The Rao Jodha Desert Rock Park was created in 2006, with the point of re-establishing the characteristic environment of an enormous no man’s land zone by the Fort. Ignored for a long time, an obtrusive prickly bush overran the recreation centre. After the shrubs were killed, in excess of 80 local types of shake adoring plants from the Thar desert were developed there. The Park reaches out over 70 hectares of restored land and has a mobile trail. It’s a fascinating sight all around the year, as its foliage changes with the seasons.

An outing to Jodhpur wouldn’t be complete without visiting the clamouring Old City. Numerous visitors come around there for views of the Clock Tower amidst the hustle bustle of the Culturally rich city. The Old City’s popular milestone, the clock tower, remains a popular attraction as it is still working! Besides that, Sadar Market holds a customary town bazaar feel. It’s clamorous and brilliantly built and sells almost everything, including the Jodhpuri handicraft, flavours, saris and other types of textile. On the contrary, if you feel awkward in groups, you might as well prefer to roam around the market zone yourself, as the ambience can be extraordinary.

Around 10 mins-walk east of Toorji ka Jhalra step-well is Gulab Sagar. This 18th century lake is assumed to be really significant in Jodhpur’s history. In addition to the fact that it provides a radiant spot for shooting. With Mehrangarh Fort in close vicinity, there are many fascinating landscapes covered up in the paths around it. They incorporate Mahila Bagh Ka Jhalra step-well and Kunjbihari sanctuary committed to Lord Krishna.

Jodhpur never fails to mesmerize us, the same way Cygnett Lite Mantra, one of the best hotels in Jodhpur, never fails tantalize your senses.
Come, book your stay with the top rated hotel in Jodhpur.

Jodhpur is well known for its elaborate assortment of street food. When you take a walk along the boulevards of the city, you step into an entirely new world of culinary adventures waiting for you to be cherished. The Rajasthani cuisine works in extremes. The dishes are either really spicy or very sweet and the best way to savour them is by visiting the local eateries and food joints. Let’s have a look on the most popular dishes originated from the lesser known corners of Jodhpur that have made a mark on the world map and made the Indian food popular.

You haven’t really tasted the authentic of flavours of Jodhpur until you get your hands on the diversified melange of delicious Kachoris, which are a big hit amongst the tourists and are a part of the staple breakfast diet of the locals. Out of the various options that you get, Pyaaz Kachori (or Onion Kachori) is to die for! So, if you are heading to Jodhpur and are looking for the perfect amalgamation of crispness, rich textures and a dollop of traditional flavours, step out in the streets and taste the goodness of yummiest Kachoris for yourself.

Mirchi Bada: This dish is not for the faint-hearted as it will test your ability to consume a full-grown green chilli. The chilly is marinated in gram flour (besan), before it is deep-fried in oil. So, when it reaches your plate it looks like a normal pakora but only with a raging chilly inside! Dip it in either mint chutney or tamarind syrup and let the heat set fire to your senses. There are a lot of local vendors that can take you to this spicy adventure.

This legendary mutton dish that the royalty feasted on after a successful hunting trip is a must-have during your trip to Jodhpur. The tender, slow-cooked meat with a distinct smoky flavour and fiery spice satiates your taste buds in a tizzy. True to its name, this traditional preparation is actually red as blood with a fine layer of perfectly cooked oil floating atop. Oh, heavens! Team it up with butter-laden tandoori rotis or Warqi paranthas cooked in ghee to add on to the deliciousness of this dish. There are a lot of local restaurants that boast about their heavenly perfection when it comes to the savoury Laal Maas. The best place to find this authentic dish is in the complex lanes around the Mehrangarh Fort. So, don’t forget to relish this traditional preparation while you are in Jodhpur.

Makhaniya Lassi: Makhaniya Lassi is not like any other buttermilk you might have tasted before. It is a rich and succulent drink with the classic regal touch as it is loaded with cardamom, saffron, dry nuts, a dollop of Makkhan (white butter) and is topped with some pomegranate seeds. Every Makhaniya Lassi vendor in Jodhpur has his own rendition of this sinful indulgence. Best spot to find this sweet delight is the market around the Clock Tower.

The delectable Ker Sangri ki Sabji tastes unique because of the massive use of Desi Ghee while prepping it. Berries (Ker) are dried and soaked overnight, then washed and boiled as the first step. After which, Radish string beans (Sangri) is cooked with curd and usual spices, like- salt, red chili powder, coriander powder etc. The dish is dry in nature and is eaten with either Bajre ki Roti (Millet flour bread) or even Makkai ki Roti (Corn flour bread) at times. The tangy and spicy flavours make it one of its own kind. If you are new to Rajasthani cuisine, you might as well try with some Daal (Lentil curry).

Ghevar: Ghevar is a Rajasthani sweet which has a major traditional significance around the Teej Festival. Besides rajasthan, it is also famous in the adjoining states of Haryana, Delhi, Gujarat and western Uttar Pradesh. It is a sweet cake made up of refined wheat flour, dipped in sugar syrup and completely soaked with sweet flavours. There are different versions of flavour according to the season and festivities. Plain Ghevar can be found in Rajasthan throughout the year, whereas Mawa & Malai Ghevar are the special highlights in the months of July & August for the Teej festival and Raksha Bandhan too. Ghevar is majorly prepared at the beginning of the monsoon season. According to Ayurveda, this sweet delight is also known to soothe your Vata and Pitta Dosha.

Thorr: Thorr is a one of its kind Rajasthani dessert which is made up of wheat flour, deep fried and flattened to be ultimately dipped in sugar syrup for a lip-smacking flavour. This oval shaped, brown coloured dish is pretty crunchy and sweet in nature. It is prepped up with whole milk and loads of dry fruits to give you the royal flavours that Jodhpur is known for.

Dal Bati, a staple food for the Rajasthanis, comprises yellow lentils spiced up with authentic Rajasthani flavours infused with spices, cooked in pure ghee and then topped with a bountiful serving of ghee and fried red chillies served with small flaky round breads that were traditionally slow cooked over cow dung cakes or firewood. The number of places that serve is delectable dish are immense. Be it a fine dining restaurant or a road side Dhaba, you’ll find the heavenly Dal- Bati Churma almost everywhere in Jodhpur. Savour this heavenly dish and indulge in a gastronomical affair with the Rajasthani flavours.

Previous Post Gangtok – Where you can Eat, Love & Pray
Next Post A Ticket to Escape Reality – Goa